Smiles better: Cara Davey now has the face she’s always dreamed of thanks to an algae filler

To look at Cara Davey today, you would never know that as a teenager she suffered such bullying at school for a facial deformity that most days ended in tears.

But it took decades and major surgery before Cara found confidence in her looks thanks to a most unusual source  an algae filler that is used to bulk up ice cream and pies.

Cara found out about the extent of her problem during a routine dental appointment at 13. The alignment of her teeth was wrong and she was suffering from severe malocclusion in which the lower molars are too far forward and do not fit into their corresponding upper molars.

This in turn sees the bottom jaw grow normally while the top jaw does not, and because the lower front teeth are further forward than the upper front teeth, the jaw lengthens and becomes long, thin and jutting.

As Cara’s face grew and her elongated jaw became obvious, classmates singled her out as a target for bullying.

From being a happy, outgoing child, Cara became withdrawn and acutely self-conscious.

in Suffolk. ‘My jaw had not been an issue so far as I was concerned until everyone started calling me Brucie [after Bruce Forsyth and his famously long jaw] or Desperate Dan after the cartoon character.

‘I would go home in tears most nights. It’s bad enough being a teenager and having the usual angst of growing up, but to be so obviously thought of as ugly is devastating.

‘My classmates might have thought it hilarious to keep saying, “Nice to see you . . . to see you nice . . .” every time I walked into the room but I didn’t see the funny side.’

Cara was 15 when her dentist recommended orthognathic surgery, which corrects structural conditions of the face or jaw. The jawbone is made smaller and then realigned.

It is a major procedure which also, at that time, involved the patient having the jaw wired together before, during and after the surgery to ensure correct positioning of the teeth and bones. Now it does not require the jaws to be completely wired.

However, Cara and her parents felt that this operation would be too traumatic. Despite continuing despair, Cara married when she was 23 and had three children.

The marriage broke up after 13 years but, she explains, this had nothing to do with her looks. Her husband had always been totally supportive of her. In 2007, Cara finally had corrective surgery on her jaw and although it was a success, there was a huge shock in store. 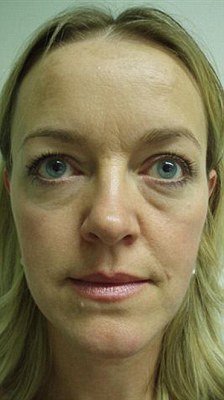 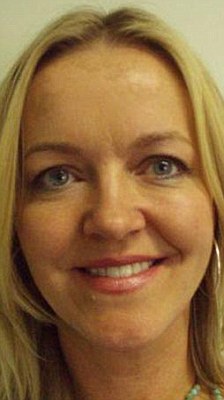 Before and after: Cara’s face is plumper after having the Novabel injections

‘After all I’d been through, now I had another problem  my face had become incredibly flat,’ she says. ‘It seemed that I had no definition at all  no cheeks or cheekbones. I was devastated.

At Cara’s first appointment in January, Doctors suggested she have a new injectable facial product called Novabel which she described as a ‘shaping agent’.

It is naturally derived from sea algae, which is used in the Far East as a thickening agent for ice cream and soups, and as a stabiliser for syrups and pies.

At Tenterden aesthetics and laser clinic ‘We have a special aesthetic treatment for women over 40 called the Cougar Contour package and Novabel is one of the major components. It is the latest, most innovative shaping agent on the market which is also used in a cerebral implant for stroke patients.

‘Cara’s problem was extreme in as much as the jaw surgery caused problems because it entailed bones being broken and reset.

‘Being over 40 meant that her skin was not elastic enough to spring back and conform to the shape, which is why it had a flat appearance.

This new face-shaper was good for Cara because it can be moulded very precisely.

‘Novabel contains microscopic spheres which are solid and filled up with algae material.

If you put pressure on the spheres, they bounce back to their original shape because they are so flexible, which makes the range of potential applications very broad.’

Cara says: ‘I was desperate to have nice cheeks and cheekbones to give my face a good, natural shape. I lay back on the bed feeling scared as doctor drew the liquid from a small bottle into her syringe.

‘The sensation was not pleasant. I’d had local-anaesthetic cream on my face so couldn’t really feel the injections  it was more the feeling of the liquid going into my cheeks. They felt as though they were being blown up to the size of melons.’

Doctor  then massaged Cara’s cheeks to prevent lumps forming. By the end of the 40-minute session, Cara recalls feeling dazed, until she looked in the mirror.

‘I burst into tears,’ she says. ‘I had beautiful, rounded cheeks  which had a lovely flush as if I’d been out for a run.

‘What’s more, I had cheekbones. It was worth every penny of the £1,600 the injections cost.’

Cara went back for her second appointment four weeks later to have a top-up. This should now last two years, according to the latest clinical data

Cara says: ‘I can’t believe it has taken me until my 40s to look normal. What a ridiculous waste.

‘But now I have the face I always dreamed of  something I never thought would be possible, and definitely not from something you find in ice cream.’